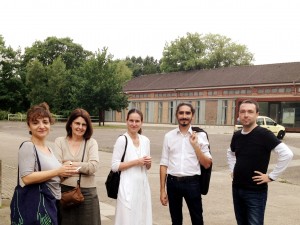 Research project funded by the German Academic Exchange Service (DAAD) and the Portuguese Foundation for Science and Technology (FCT), 2014-2015

The research project focuses on German-Portuguese artists’ relations in the second half of the 20th century, which – although an important aspect of the artistic exchange between artists in the various European art centers – have, so far, found only little recognition and were rarely examined by scholars. Particular emphasis is on the collaboration and the cooperation of artists in the (informel) networks of Fluxus and the neo avant-garde and their significance for modern and contemporary artistic practices.

In the center of the research project stand the examination of the role that German and Portuguese artists of Fluxus and the neo avant-garde played in local, regional, national, and international European art centers during the period 1950 to 1980 and the aspects of their collaboration practices as well as the concrete network structures and the practical forms of their artistic exchange.

The concrete objectives of the research project are:

The larger goal of the project is to establish research collaborations with other colleagues and research institutions in Europe in order to jointly work on a comprehensive study of the role of artists’ networks in the 20th century and its importance for European art, society, and politics.